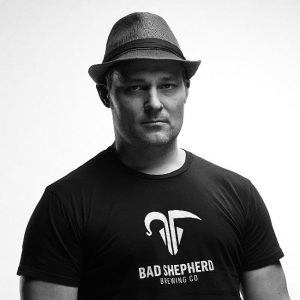 Dereck Hales, alongside wife Diti Hales, left the world of corporate marketing at Mondelez International in 2015 to open Bad Shepherd Brewing Co., a brewpub in Cheltenham.

With a core range of six beers and seasonal and limited edition releases, Dereck’s beer can be found on tap at Bad Shepherd and in venues and bottle shops throughout Victoria.  Their beers have experienced a high degree of consistency in market and accolades in the trade, with each beer they’ve entered into the AIBA’s having won a medal– including 3 gold medals in 2017 when Bad Shepherd was runner up to Champion Small Australian Brewery.